Nephews. I’ve got a few of them myself, as it happens. When are their birthdays? You’ve got me there. I know one’s is exactly one week after mine. Or exactly one week before, one week away from mine…Basically I know when my own birthday is.
As for their middle names? Hmm…Sam maybe? After me?

Am I as hopeless as hopeless Andy here in Uncle (BBC3), who’s picking up his sister’s dweeby son Errol from school for the first time? (I’ve never done that, I’m afraid). Neither Andy nor Errol is over the moon about the arrangement, but they turn out to be quite good for each other. Well, to start with, Errol saves Andy from killing himself. (Indirectly, and to be honest, Andy’s chosen method – battery-operated radio dropped into the bath – would have ended in failure, like everything Andy does. The radio would have died, that’s all.) And Andy shows Errol a few things about the world.
Like how to drink and drive, and crash a car, and bunk off football to go to a strip club. Plus what love means. Basically it – love – is like walking on water, until you realise you’re not walking on water, you’re drowning, and then a shark bites your foot, and another bites your testicles … and it goes on like that until somehow you eventually end up being pooed out by a hyena, love is just a steaming pile of hyena droppings. Ha!

The idea – two unlikely people thrown together against their will – may not be an especially surprising one. Nor is it hard to see where it’s going (I’m thinking Andy and Errol might start to get on less badly, perhaps even feel some sort of reluctant affection). The situations they find themselves in aren’t always the most original either.
Like competitive dads at football practice, abusive to the ref and to other kids – again, not a seam untouched by the comedy writer’s pick. But here Andy, not a dad but an uncle of course, is so ashamed by Errol’s puniness he disowns him (“What’s this, ask-a-stranger-for-water day, get your own water”). He claims another kid, the best footballer, as his, before taking the dad he’s trying to impress off to the car to get stoned.

Ha! Again. Uncle doesn’t hold back. It’s written – by Oliver Refson (who also directs) – with big cojones and imagination. There are loads of good lines. Like: “My dad says that ‘musician’ is just another word for unemployed.” And: “Mummy, Uncle Andy touched my special equipment.” As well as lines that make you wince and cross your legs: “I will cut your dick off with a spoon” (Ouch! #DickSpoon).

The two protagonists are great characters, both over the top and a little familiar. We all know Andys and Errols, no? Fabulous, believable performances from comedian/singer/songwriter Nick Helm and young Elliot Speller-Gillott. Also from Daisy Haggard as Andy and Errol’s shambolic sister/mum (love her “shush” to the other people in the library where she’s trying to make a phone call). Oh, and Helm breaks into song from time to time, adding a lovely musical madness to proceedings.

Uncle manages to be warm as well as dark and rude. And hilarious. It could well be the thing to fill the (good) comedy void since Him & Her and Toast of London ended. Actually the pilot was on Channel 4, but the former Channel 4 head of comedy took it with him when he moved to the BBC. Better than nicking the stapler. 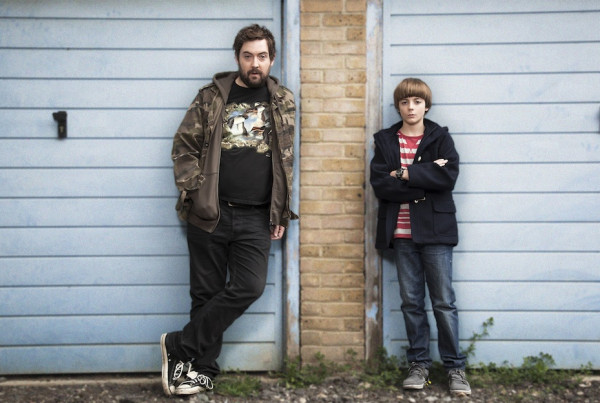